A screw is a broad category of mechanical fastener with a threaded shaft, designed to screw into a part. This includes wood screws and self-topping screws, which have a tapered shaft with sharp threads designed to cut a mating thread in the part to which they are fastened. It also includes machine screws, which much more closely resemble bolts, but their entire shaft is normally threaded.

Bolts and screws are sometimes delineated by their use. According to these definitions, a bolt passes through unthreaded holes in parts and is secured by a nut while a screw mates with a threaded hole in one of the parts being fastened. In practice this definition is not strictly applied. The term bolt is usually used for a fastener which is not self-tapping and has only part of its shaft threaded. Fasteners which are either self-tapping or which have their entire shaft threaded are normally called screws.

Screws often rely on friction at the threads to remain securely fastened. In the case of a self-tapping screw, radial expansion of the hole causes much of this friction. For machine screws, friction is mostly caused by axial force resulting from torque applied to the head and the subsequent tension in the screw combined with compression of the parts. Machine screws may alternatively, or additionally, use a locking nut or thread-locking adhesive to prevent loosening. 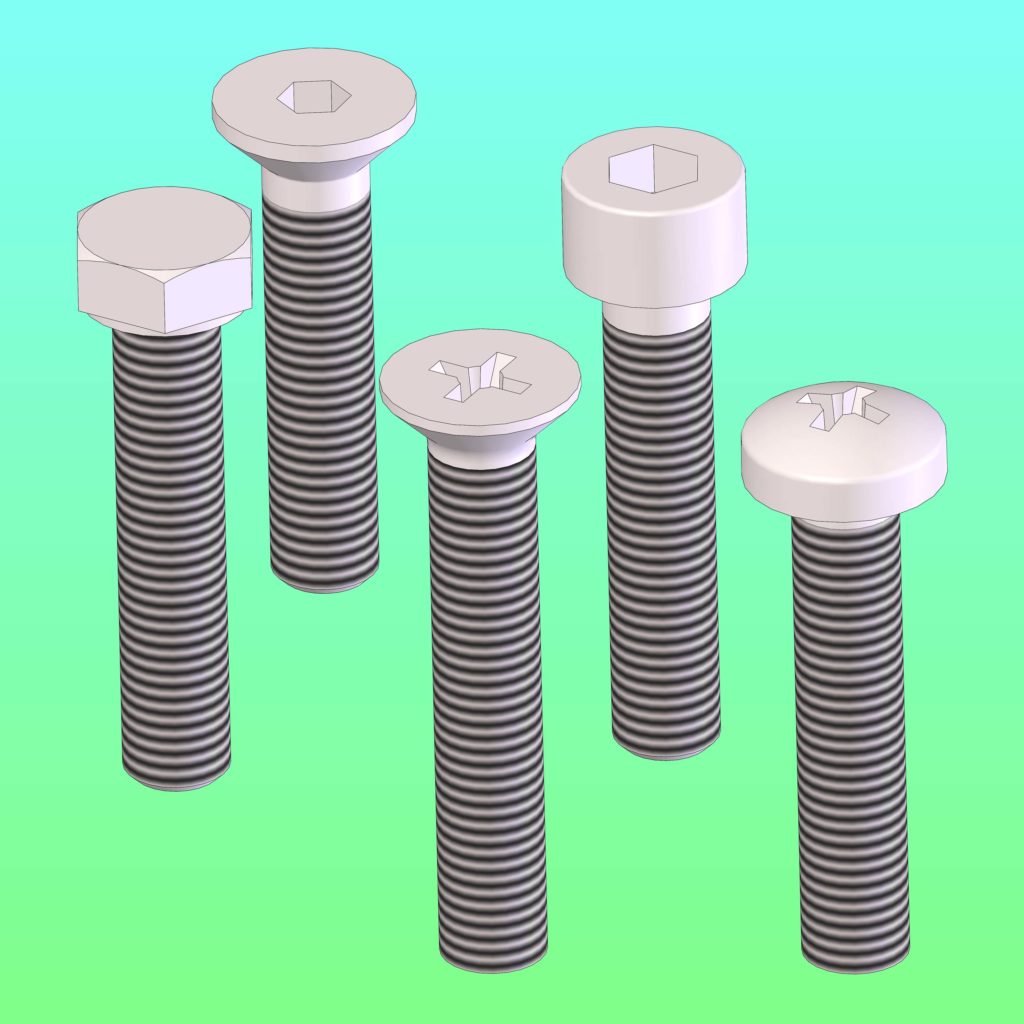 Machine screws have a standard thread on a parallel shaft, designed to be screwed into a tapped hole in a part, they may also be used with a nut. The most common type of machine screw is a hex screw — which is very similar to a hex bolt, but without the shank. There are many types of machine screws for specific applications, generally differing in the shape of the head:

Socket headed screws may have many different socket types. The order in which the shape of the head and the socket are given in the name may vary. Some of the most common socket types are:

Machine screws are graded according to their strength, using the same system as bolts, with two numbers separated by a point. The first number is the ultimate tensile strength (UTS) in MPa divided by 100 and the second number is the ratio of yield strength to the UTS. Common classes are 5.8, 8.8, and 10.9. For example, a grade 8.8 screw has a UTS of 800 MPa and will yield at 80% of this value (640 MPa).

Self-tapping screws including wood screws
Self-tapping screws is a term generally used for screws designed to cut their own thread in sheet metal, although in a general sense wood and plastic screws are also self-tapping. These types of screws often have a sharp pointed end and sharp threads on a tapered shaft. They may have a section of unthreaded shank, like a bolt. Common types include: